What has eight legs, three webs, and traveled 6,800 miles to see you?

Spiders Can Be Fun

Spiders, whatever species, can be fun. Just look at all the crazy Spiderman stuff offered on Amazon.

Spiders have been long-maligned in silly monster movies. Enjoy some of the goofiest. No Joro Spider movies… yet.

Q: What did the spider want to do after college?
A: Become a web designer!

Q: What do Joro Spiders eat in Paris?
A: French flies.

A guy down the block was out for a walk and was kicked by a huge, grumpy Joro spider.
There’s a nasty bug going around.
“Son,” I said, “Get me a phone book.”
He laughed, and said, “Seriously, Dad? Just use my phone.”
I whacked it against the wall. Got the Joro Spider!

What do you call an undercover Joro Spider?
A spy-der.

What did the Joro Spider say to the fly?
“Pleased to eat you!”

Come back for more spider fun. Send us your jokes and favorite movies on Facebook.

We’ve grown up with spiders, learning a little about them perhaps before any other bug. You know the nursery rhyme, Itsy Bitsy Spider. It’s history isn’t clear, but it was well-known as of 1910. It needs an update, don’t you think? Now, let us hear you. A one, and a two, and a… 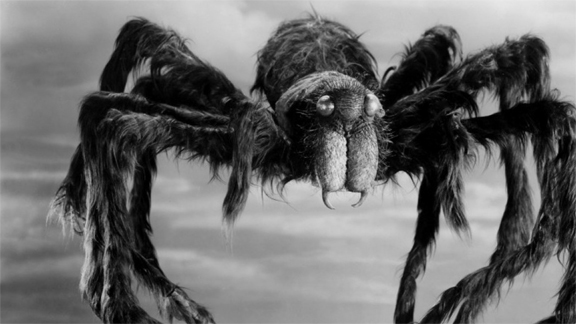 © Copyright 2023 All Rights Reserved. JoroSpider.com
This site may contain affiliate links so I earn a commission.