If you’ve wandered the web looking for information about Joro spiders, you’ve likely encountered someone posting in all CAPS: THEY ARE EVIL!!! THEY KILL HUMMINGBIRDS!!! This often accompanies comments like, “Squish them all” and other “kill nature that scares us” type posts. Histrionics and the internet seem to be friendly bedfellows.

Thankfully, this isn’t true. Or…

This is possible but exceedingly rare. Let’s get into why this is unlikely.

Joro spider webs are large and strong. An awkwardly flying hummingbird, or one younger or weaker, might get caught. The spider bite can kill an insect, but a caught hummingbird is more likely to die or dehydration or starvation.

Hummingbirds are remarkably powerful flyers. With a wing speed of up to eighty flaps a second, it takes a special camera just to see. Their weight (0.1 to 0.2 ounces), as light as they are is still heavy by spider web standards. Match that with flight velocity and wing speed, and the Joro web will be torn apart.

If you see a hummingbird around a Joro web, know that it is there looking either for a snack (they love to munch spiders) or to liberate some of the web to build its nest.

The circle of life — the ecosystem itself — has within it predators. Sometimes, we wish the hunted was, in fact, not hunted. We might dislike the hunter for doing what it is built to do.

In this particular case, the spider is probably not eating the hummingbird.

If you love hummingbirds (and, seriously, who doesn’t?), and you see fewer birds matched with an increase in spiders, there’s another cause. 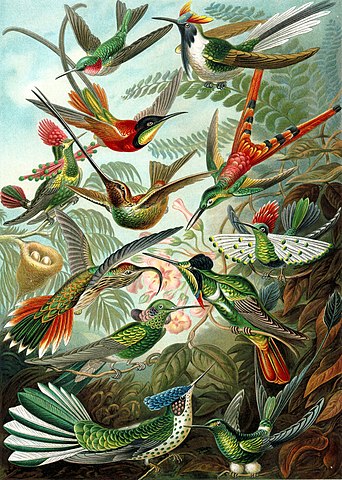