Come on, this should be easy

The Joro spider. Love ’em or not love ’em, they’re here and here to stay. We think they should become the Georgia state spider.

If you meet someone these days from out of state, they have one question. It isn’t, “Like them Dawgs?” or “Have you been to Stone Mountain?” It’s, “Are you seeing any of those monster spiders?” They might cite a ridiculous news article about spiders with wings, webs so strong that they can catch a red shouldered hawk, or how people are dying because of spider bites.

Let’s look at it objectively.

These are big, colorful spiders with gloriously gold webs. They are bigger than the more common wolf spider, less dangerous (by far) than the brown recluse and black widow spider, and more interesting than the banana spider.

Though not uniquely in Georgia, they started here once arriving from Asia. Hence, we should as a state take the lead on this.

They eat bugs. That’s a spider thing, but among their favorite meals includes the aggressively destructive brown marmorated stink bug.

While not peach-colored, they evoke the brightness of the South with their primarily yellow bodies. Like the similarly colored Eastern tiger swallowtail, Georgia’s state butterfly, they are visible immediately.

The Joro spider is friendly when handled carefully. We don’t suggest picking one up, but we have seen many photos of others handling them safely.

Their emotional impact is strong. In that, they symbolize passion, a Southern trait. Sure, some less educated people fear them, but such is diversity. Most of us look at them, and wonder.

We don’t know yet what’s involved to make it the official Georgia state spider, so keep watching this space.

Learn the dining habits of a Joro spider. 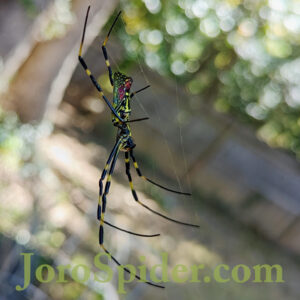