To mate, Joro Spiders often have to take to the air

What are the Joro Spider mating habits? Spiders need love too, right? The trouble is how do they find their soul mate.

What experts do know is that they travel by ballooning. It’s kind of like Uber… well, it really isn’t. It’s more like going on a ride at the end of a kite. When the wind is right, they disperse some webbing. That catches the wind and off they go.

Eventually, they land. Then what?

In the University of Georgia piece, Like it or not, Joro spiders are here to stay, Byron Freeman, director of the Georgia Museum of Natural History, says:

“The male has to drift in and find the female,” Freeman said. “Sometimes there’ll be four or five males on a web, sometimes there’ll be one, so the males are moving between webs. When you have a large population it seems feasible that a male could just drift from one spot to the next, but when you don’t have a lot of webs around, how does the male show up?”

While this isn’t a Joro Spider, you can get a sense of how it is done in this National Geographic video.

“The male has to drift in and find the female”

Byron Freeman
Director of the Georgia Museum of Natural History 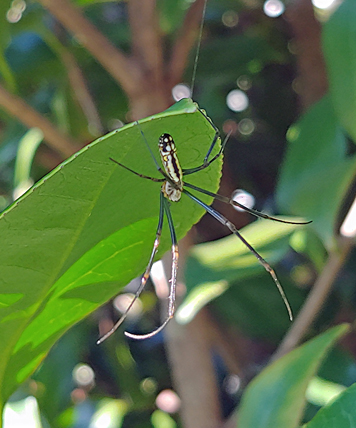