How To Identify a Joro Spider

You Can Identify a Joro Spider

Is your deck covered with spiders? Which ones are Joros? How are they different from other orb spiders?

How do you identify a Joro Spider? Colors? Web type? Habitat? Size? Season? All of that. Once you know what one looks like, you know.

On a certain level, that confusion makes sense. After all, the Joro is new to America and we’re just catching up. This confusion leads people to think they have more Joros. There are a lot of Joros, no doubt about it, but not all orb spiders with big webs are the same. All are originally from Asia.

Take a look at our Instagram page. A picture of a spider is worth a thousand words.

Females, the big ones (3-4 inches) we see in autumn, are primarily yellow with stripes of dark blue. The abdomen, red/pinkish/salmon can be found near the spinnerets (where silk comes out).

Males are much smaller, thinner, at just a little over 0.25 inches. Colors are simpler — largely a soft brown, with darkish gray/black and muted yellow stripes. The patterning looks almost computer generated.

Their long, thin legs (yup, eight legs — come on guys, this is a spider!), are irregularly striped. Excellently camouflaged as they can be nearly translucent in the sun. The bands will be in a range of browns/blacks and yellows.

Here in Georgia where woods filter in even the suburban neighbors, you’ll find them a-plenty.

These are outside spiders. They have no use in our homes. Not enough room for a web and not enough food.

They love the sun, and can be found with webs in clear view: in large bushes in your neighbor’s yard, between electric lines, under second-story decks. The spider will probably be visible.

You’ll find them less often in the thick of the woods, though it happens.

They arrived by hitching a ride on a shipping container from Asia, but most of their travelling is via the wind.

If you’re lucky, you’ll catch one of these babies in transit. No, they don’t take public transit in Atlanta (seriously, not if they want to go anywhere). They fly. Really, they do. Actually, it is more about falling with style. Not long after they are born, they disperse by catching the wind. Using a filament of silk, they float when a decent breeze comes through and off they go.

You might see them after they’ve landed, in tiny webs much like the ones they’ll make as adults. You’ll find them on deck chairs, bushes, mailboxes. Anywhere it thinks it can stay safe and find food is where it calls home.

Identify a Joro Spider by Its Web

You’ll know their webs by the size, for starters. We have seen ones well over 10 feet spanning between two trees. There’s more to the web than size, though. It’s chaos and clarity, which seems to be the Joro spider’s MO.

You’ll stop in awe if the sun is setting and you catch the shining, but subtle golden hue to their massive orb. Look more closely, and you’ll see an irregular and equally large web on the front and back.

The web will be fairly clean of detritus, excepting for their most recent meal.

It’s as strong as it is beautiful. While the rumors that they catch birds is ridiculously unfounded, the web is tough enough to trap large insects. 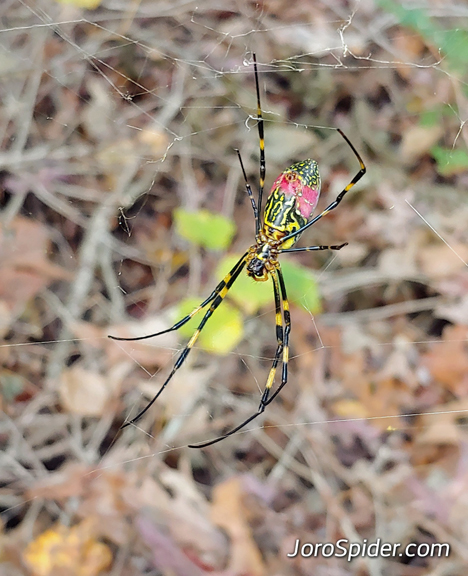